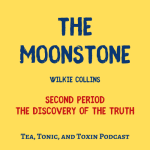 Wilkie Collins Podcast - The Moonstone, Second Period: The Discovery of the Truth

Welcome to the Wilkie Collins podcast episode on part two of The Moonstone!

This masterpiece includes a stolen Indian gem with a bloody past, plot twists, red herrings, a small circle of suspects, and a couple amazing detectives. It’s a serious page-turner.

T. S. Eliot described The Moonstone as the “first … and greatest of modern English detective novels.” The story includes several features of contemporary detective fiction and helped establish many of the genre’s conventions.

Estimated Reading Time: 8 hours. Share your thoughts and check out the questions below!

What We're Talking About in our Wilkie Collins podcast episode on the Moonstone, Part II

We continue the discussion that we started in our podcast episode on Part I (The Loss of the Diamond). For example …

Miss Clack is clearly in love with Godfrey, though she disguises it with admiration for his Christian virtues. (Have you ever deceived yourself over your true motivations?)

Let’s talk about the characters’ morality and motivations. Miss Clack is painted in a rather absurd light in the way she speaks about her genteel family members. She tries to get them to read tracts and books and participate in her bizarre charities. And she often seems misguided. And yet she has her points. Was Wilkie Collins intending to merely portray Miss Clack as a hypocrite, or did he agree with her at least some of the time?

Does Collins seems to lack Dickens’ biting sarcasm over neglect of the poor?

When Godfrey proposes to Rachel, he asks her, “Do you know many wives … who respect and admire their husbands? And yet they and their husbands get on very well. How many brides go to the altar with hearts that would bear inspection by the men who take them there? And yet it doesn’t end unhappily — somehow or other the nuptial establishment jogs on. The truth is, that women try marriage as a Refuge, far more numerously than they are willing to admit; and, what is more, they find that marriage has justified their confidence in it.” Whoa. Thoughts?

Gabriel Betteredge has what he calls “detective-fever,” where the “horrid mystery hanging over us in this house gets into my head like liquor, and makes me wild.” Characters like Rosanna behave as though subconsciously intoxicated by outside forces. What are your thoughts about “detective-fever”?

It’s implied at the beginning that the original perpetrator, John Herncastle, probably killed several Indians and stole their sacred moonstone, contrary to a direct command, under threat of death. No one could definitely prove it until he died and the moonstone came out of hiding to be bequeathed to Rachel. Then comes so much indecision, and plotting, and hiding, and suspecting the Indians of trying to get it back. At what point did it become British property? It was stolen, and the theft came to light when the thief died. Why wasn’t it returned to the Indians? Is this a representative example of historical looting?

Wilkie Collins seems to sympathize with outsiders such as Rosanna, Ezra Jennings, and the three Brahmins. What makes these characters outsiders? Why do most of the characters distrust and dislike them? How do you feel about how they are treated by other characters? What signals does Collins give to suggest that he has an affinity for these characters (and that we should, too)?

Franklin Blake learns that the doctor, Mr. Candy, gave him opium without his knowledge, which Franklin calls an act of treachery. Ezra Jennings says, “Every doctor in large practice finds himself, every now and then, obliged to deceive his patients …. I don’t defend the folly of playing you a trick under the circumstances. I only plead with you for a more accurate and more merciful construction of motives.” How did you feel about the “trick” Mr. Candy plays on Franklin?

The Moonstone contains many of the elements of classic detective stories: sequence and causality, secrecy and silence, buried clues, encoded messages, bumbling cops, an idiosyncratic detective, outcasts with excellent skills in observation, withheld evidence, red herrings, and a small circle of possible suspects. The reader knows what the characters know, when they know it. What themes and ideas used in the book have since become common in the genre?

Most everyone acts as either a detective or a spy in the book: Gabriel Betteredge, Franklin Blake, Rosanna, Miss Clack, Mr. Bruff, Ezra Jennings, the boy who follows “the sailor,” and, of course, Inspector Cuff. Who impressed you most?

At the end, Inspector Cuff writes, “there is a chance of laying hands on the Indians, and of recovering the Moonstone yet.” Yet on the last page, the gem once fixed to the bosom of an Englishwoman’s dress is returned to the forehead of the god of the Moon. What’s your take on the ending? 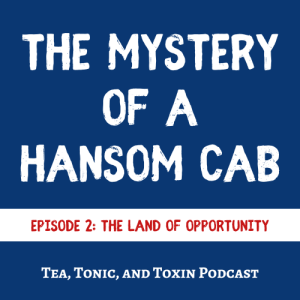 The Mystery of a Hansom Cab - Fergus Hume Podcast

Sarah and Carolyn think Victorian Melbourne was delightful. So, who committed the hansom cab murder? You’ll have to listen to the Fergus Hume podcast to find out. Or you can find out by reading the book. Here’s an idea: Read the book AND listen to the podcast episode! 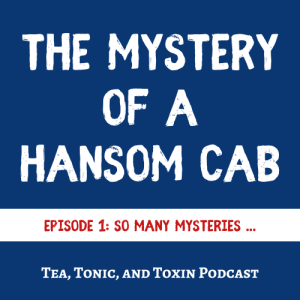 The Mystery of a Hansom Cab Podcast

Sarah and Carolyn decide to book one-way tickets to Melbourne because Fergus Hume’s 1886 novel is just that good. The mysteries are aplenty, and the Australian setting is pure delight. Who committed the murder in the hansom cab – and why? So many twists, turns, and red herrings … 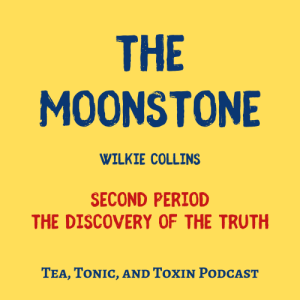 Sarah and Carolyn dig into the second part of Wilkie Collins’ 1868 novel, The Moonstone. Who stole the Indian gem from the young woman who inherits it from the guy who initially stole it. (You tracking?) The second part (second period) is called The Discovery of the Truth. It's SO good!